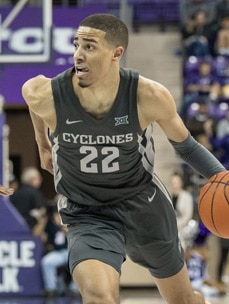 Tyrese Haliburton is a long, rangy, athlete who can become an elite NBA player on both ends. Offensively, he is a force in transition. He is able to not only run the break but also get out wide and convert high percentage shots. In the half-court, Haliburton is very effective as a catch and shoot player, and knocks down the three with efficiency.

Defensively, Haliburton is long and can defend multiple positions. He possesses excellent quickness and has the potential to be a lockdown defender at the next level.

Pushing the pace in transition as the primary ball-handler.
Running the lanes wide in transition with great shot selection.
He can knock down the catch and shoot three efficiently, especially from the corners.
Very good off the ball. Constantly stays active on the offensive end.
Versatile defender who can guard multiple positions.
Length and speed make him a perfect fit for a pace and space style of offense.
Has the physicals to be a perfect fit in the modern NBA.

Haliburton cannot create his own shot off the dribble.
Doesn’t have great vision for an NBA point guard.
Needs to work on his ability to create out of the pick and roll.
Has trouble creating separation.
Needs to work on creating offense off of DHO’s especially at the NBA level.

I believe that the Phoenix Suns are the best NBA fit for Tyrese Haliburton. Ricky Rubio is solid, but he is not the long-term answer at point guard. The Suns have had trouble getting into a playoff position in the Western Conference, a big part of that is due to their weakness at point guard. Haliburton would be a great fit in Phoenix because of his ability to be a two-way threat. Devin Booker has trouble on the defensive side of the ball so Haliburton would be a nice addition to the Suns backcourt in terms of defense. Offensively, Haliburton wouldn’t have to be the primary facilitator because Devin Booker would be the primary ball-handler. Thus, Booker and Haliburton would compliment each other perfectly, making Haliburton an excellent addition in Phoenix.

If there is one team that shouldn’t draft Haliburton, it’s the Washington Wizards. The Wizards have one of the league’s best backcourts with John Wall and Bradley Beal. To become a legitimate playoff team, however, the Wizards should probably go with a frontcourt player in the draft. By selecting Haliburton the Wizards would not be addressing a team need. Haliburton would get minutes solely as a backup player and will not be given an opportunity to truly reach his potential. Bradley Beal and John Wall are both two-way guards with superstar ability. Drafting Haliburton wouldn’t make sense.

Haliburton is likely to be a lottery pick, but due to team fit, could slide all the way down to 17. I believe that Haliburton can go as high as pick 5 and as low as 17.

Basketball IQ: Haliburton is a high-IQ player who plays efficiently and within himself. It is very rare that Haliburton takes bad shots or makes bad decisions on offense, and defensively he almost never has lapses. His IQ is among the best in this class, he won’t have trouble adjusting to the NBA in this category.

Leadership: Haliburton was definitely the best player on his team, but isn’t necessarily a good leader yet. Iowa State struggled to stay .500 in the Pac-12, and in critical games, Haliburton often disappeared. He had only 5 points against third-ranked Kansas, and 6 points against the second-best team in the nation, Baylor. Haliburton needs to step up when the chips are down to truly illustrate his leadership. He simply did not do that in big games. On the defensive side of the ball, Haliburton is an anchor, so he gets some points there.

Athleticism: Not the most explosive player, but to label him as unathletic would simply be false. He has a deceptively quick first step, great speed in transition with or without the ball, and NBA level stamina. You will never see Haliburton standing still on either end of the floor. He’s a tireless workhorse which may be one of the most underrated athletic qualities in NBA prospects. So he may not jump out of the gym, but he will tire you out and run right by you.

Upside: The old saying goes ‘you can’t teach height’ and that’s true. Haliburton’s physicals alone give him tremendous upside. His length and size at the guard position is more than ideal for the modern NBA. If Haliburton can learn how to create off of the dribble and improve his court vision, he will be a very well rounded pro.

Shooting: His shot isn’t the nicest to look at, but it goes in. He also shoots it quite efficiently. However, he is only efficient on catch and shoot opportunities. When he’s coming off screens, on the move, or pulling up off of the dribble, he is far less effective. His three-point shooting will help him get into rotations at the NBA level, however, so it’s one of his strong points as a prospect.

Passing: His vision isn’t the best, but it’s decent. Ideally, as a point guard, you would want Haliburton to facilitate the offense in the half-court. He isn’t there yet and seems to play more off-ball. He will need to go to a team where he is not relied upon to be the primary facilitator.

Dribbling: Ball handling isn’t exceptional, but his handle is tight and efficient. Most of his dribbles are north-south and have a purpose. At the NBA level, he’ll need to have a tighter handle if he wants to be able to beat anyone off of the dribble.

Rebounding: His size and length as a guard make him an exceptional rebounding guard. Haliburton is great at crashing the offensive glass but does not contribute much on the defensive glass. His main priority is trying to run the break and get an easy bucket in transition the other way. Overall, he is a more than capable rebounding guard.

Hustle: Haliburton is constantly in motion and has one of the highest-motors in this class. He gives it his all on the defensive end and will do whatever he can to try and get open on offense. There is no doubt that he will always give you 100% effort on the floor.

Defense: Probably Haliburton’s biggest strength, he is an excellent defender, both as an individual defender and as a team defender. His length and size make him a matchup nightmare against either guard position. His quickness and speed allow him to keep up with smaller guards and his length allows him to disrupt shots or deflect passes. His size also allows him to matchup against some small forwards as well.

He was a defensive anchor all year for Iowa State. He had timely rotations and had a knack for anticipating passes and getting into passing lanes. He averaged 2.5 steals per game last season, and I would expect to see more of the same at the NBA level.

The NBA draft is an opportunity for the weaker teams to get better. For new prospects to become stars. For blockbuster trades and surprises. The NBA draft is truly a time of beauty. I provide expert opinions on NCAA prospects and analyze whether or not they are NBA ready, which teams they would be the best fits, and where in the draft they will be selected. Through experience as a Video and Analytics coach, Sports writer, and as a Coach, I think I can provide unique and valuable insight to the draft process.