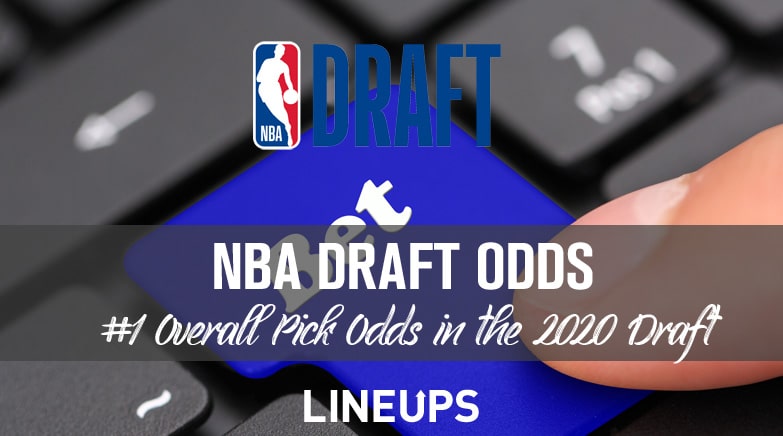 The 2020 NBA Draft order is now set and the DraftKings odds have changed now. The Minnesota Timberwolves won the lottery as they will have the number one pick. Golden State will follow and then the Hornets. The Cavaliers and Knicks were the losers of the draft. Now that the order is set, Anthony Edwards is the favorite to go first overall. Lamelo Ball could sneak in.

The Importance Of Draft Order When Wagering

With the lottery still just a couple of weeks away, we won’t have an exact draft order until then. However, the Warriors, Cavaliers, and Timberwolves all sit with a 14% chance. The Atlanta Hawks are at 12.5%, while the Pistons are at 10.5%. The NBA Lottery is not always rewarding for the team with the worst record. We have seen some very friendly bounces rob a team with the worst record of that first overall pick. Because there is no clear cut number one, the importance of who gets the number one overall pick is large.

Teams have their own sets of scouts that might view a player differently from other teams. There are multiple executives on a team that has their say in the draft process. They can draft based on team needs or simply take the best available player and make it work. For example, Cleveland has plenty of guards on their roster from the prior two classes, would they take another? The team landing the first overall pick is going to shift odds and that will be something to pay attention to.

Will Golden State Trade Their Pick?

After injuries to Stephen Curry and Klay Thompson, causing them to miss most of the 2020 season, they have found themselves with the worst record in the NBA. Now Golden State finds itself in an unusual spot over the last decade, with a chance for a number one pick. If Zion Williamson would have come out in this draft class, the NBA world would have burned itself to the ground due to the chance of him landing on the Warriors.

Golden State has their needs and most of it is in the frontcourt. They could use a wing and backcourt depth but overall they find their roster in decent shape moving forward. Does this team need a prospect? No, they don’t. What they need is more established players around them and a first overall pick can get them that. There are plenty of big names out there in the open that could land in Golden State. The Warriors also have Minnesota’s draft pick for 2021 and that is a chance down the road to land some more youth.

Steve Kerr has made some comments on this draft class talking about how there is no obvious number one pick and he is debating on using the pick to help the future or using it in trade to get a veteran in to play right away. While the Warriors could use some size in the frontcourt, opting for more veteran players to compete in an improved Western Conference should be the option. Golden State trading their pick away would mean a team is eying one of these names.

Looking at team needs can help narrow down a potential first overall pick. Cleveland is the team that is all too familiar with this lottery position. They have been using draft picks on guards over the last two drafts. They have Collin Sexton and Darius Garland. The vibe in Cleveland remains lukewarm on both, especially given neither are huge playmaking point guards. A player like LaMelo Ball should be the most interesting to Cleveland. Despite taking two guards in the last two drafts, Ball should be the first man off the board if the pick falls to Cleveland. The Atlanta Hawks would be another team where guard play is likely what they will grab. Anthony Edwards who is playing at Georgia makes a lot of sense to play alongside Trae Young.

Minnesota is the other team with a 14% chance at the first overall pick. They have been burning and turning roster moves over the last few seasons. D’Angelo Russell ended up coming over in the Andrew Wiggins trade to finally give them a prominent backcourt scorer. This does leave them very thin on the wing and they don’t have much to go alongside Karl-Anthony Towns either. Deni Avdija is a very intriguing name here given his playmaking abilities and pick and roll game. Given the positional need and him being a top-five talent in this draft, I could see Minnesota making this pick.

The Detroit Pistons and Chicago Bulls are two very interesting teams if the ball falls to them for the number one overall pick. Detroit needs about everything under the sun given the direction has been completely lost and based around older veterans over the last few seasons. Christian Wood is seemingly the big they will build around and they desperately need a playmaking point guard. Once again, Lamelo Ball would be that. Now Chicago has been stocking top end picks over the last few seasons and nothing has come about. A wing would be the ideal grab here, but the Bulls can go in a number of directions, especially if they are feeling Zach LaVine trades.

New York hasn’t had any luck on their side and has a 9% chance of getting the number one overall pick. Ball is the best option for the Knicks given they are in dire need of a playmaking point guard. Killian Hayes would fit the bill as well. The remaining teams in the lottery are all in a similar boat where they need to be looking at the best available player.

The Case For The Top Five Prospects

Anthony Edwards (-118) is the top dog right now and deservingly so. While the shot IQ needs some work he is extremely talented and has the potential to take over a game. Edwards is extremely athletic and fits the needs of most teams within the lottery. Given most of these teams need an athletic guard and scoring, you can make the case for him just about anywhere. Now given the odds for the teams in the lottery, it makes sense why Edwards is number one. He and Ball seemingly have the best ceiling in the draft and these are the two names up for debate right now. Minnesota is the team out of the three worst picks I could see going elsewhere.

We talk about Golden State above and if they trade the pick, then there is a lot that factors in due to the other team involved. Now let’s say they keep the pick. James Wiseman (+200)  is the talented center out of Memphis. Golden State has a need for an athletic big, someone with more size. Wiseman fits that role. He is big and can move in the modern NBA. This is perfect. Steve Kerr’s decision is going to be made upon if a guy can produce in year one and help the team. I do believe Wiseman can be that, especially on the defensive side. Wiseman is a very intriguing bet if the Warriors are number one, but the worry of them trading the pick is there as well. Cleveland could also use the big man, but I do find them prioritizing guards over bigs.

For teams looking at Lamelo Ball (+450), they will be in need of a playmaker. He has great vision and can maneuver around defenses to find the open man or finish at the rim. The shooting comes and goes just like the rest of the family, but the big difference between him and his brother is Lonzo has a better defensive game. Golden State and Atlanta shouldn’t have a ton of interest given they don’t need his position. Detroit and New York are the two big teams that would instantly grab him if they were able to land the first overall pick. The Knicks don’t have as much of a need for Edwards as they do a ball-handling point guard like Ball.

Onyeka Okongwu (+1000) is going to be a great addition for wherever he lands. He is a strong defender and rim protector. He can play both the four and the five and would be helpful for a team like Minnesota. He is efficient around the basket and has a high motor as well. Minnesota and Detroit are two teams I could see landing him, but Minnesota would be the more likely taking the first overall pick. The reason for this is Detroit is in such dire need of a young backcourt player to build around where the Timberwolves have D’Angelo Russell and Jarrett Culver. Obi Toppin would be there as well you can make the case for him.

This draft class doesn’t have an eye-popping stud small forward, but Deni Avdija (+2000) is the closest to it. Once again, the Minnesota Timberwolves could easily use a wing after the Andrew Wiggins trade. If a team wants to get weird and shake things up, Avdija is the guy I would see any team taking. He is not overly athletic but is sneaky quick. The playmaking ability he has is something any team could use. These international players usually step in more game ready and there are a few teams that could use his ability on both ends of the court. He is also a very good defender and reads the game well.

The 2020 NBA Draft is scheduled for Friday, October 16th, 2020. It will be aired on ESPN, as the NBA plans on holding it at the Barclays Center in Brooklyn. The lottery to determine the draft order is August 25th.

How Is The First Overall Pick Decided In The 2020 NBA Draft?

The first overall draft pick is decided through the NBA lottery process. Each team that does not make the playoffs has a number of lottery balls correlated with their record. They will take out the lottery balls and that is how the order is decided.

Who Is Favored To Go First Overall In 2020 NBA Draft?

Anthony Edwards is currently -118 on the DraftKings SportsBook and he is one of the most talented players in this class. He is a shooting guard from the University of Georgia and fits with a number of teams currently in the top five.

Who Has The First Overall Pick In The 2020 NBA Draft?

There are five teams that have over a 10% chance of getting the first pick in the lottery. The Warriors, Pistons, Timberwolves, Hawks, and Pistons are all in contention. However, we will not know until the lottery takes place on August 25th.

Who Was The Number One Pick In The 2019 NBA Draft?

Zion Williamson out of Duke University was the first overall pick in the 2019 Draft. Williamson has been praised as a generational talent and the next face of the league. He was taken by the New Orleans Pelicans.

The NBA Draft has been a staple of Jason’s summers for the past decade, often looking back on the what-ifs of each draft class. He enjoys learning more about international talent and has an eye for the prospects that come out of the University of Arizona.