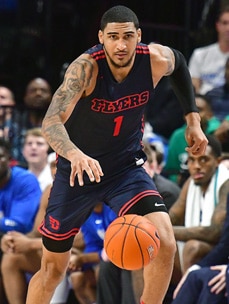 Obi Toppin did not follow the typical path to the NBA. He only played one season of varsity basketball as a senior at Ossining High School in New York. Toppin then enrolled at Mt. Zion Preparatory School in Baltimore, Maryland, for a post-graduate year after receiving no NCAA D1 offers, which significantly boosted his national profile. He received offers from a handful of programs and committed to Dayton before having to redshirt his true freshman season as he was academically ineligible to play. In his redshirt sophomore season, Toppin broke through massively as he was the consensus NCAA player of the year and won several awards as he led Dayton to a 29-2 record in what was pacing to be the team’s best season of all time.

Toppin has a wide range of outcomes in the draft, as it’s hard to say how teams will evaluate a 22-year-old forward with an unorthodox path to the NBA. There’s plenty to love about Toppin’s game, though, as he should fit right in as a pro. He led the NCAA in dunks last season, many of which came on putbacks, heads-up plays that highlighted his anticipation and awareness. Toppin is a very bouncy player and is explosive above the rim, allowing him to get easy buckets. He can get plenty of buckets of the more challenging variety as well, as his 39% 3-point shooting from last season attests. He is an excellent pick-and-pop or pick-and-roll partner and possesses high Basketball IQ, which enables him to produce in a variety of offensive roles. He is also potent in the transition offense as he flies down the court and can finish the fast-break attack with an explosive bucket at the rim. Toppin is also a surprisingly great passer at times – he had a stable assist/turnover ratio last season and is adept at finding open teammates. His all-around offensive game gives him a high floor in a draft full of hit-or-miss guys.

Defensively, Toppin has a hard-and-fast ceiling due to his limited athleticism. He does have good bounce so he can protect the rim, but he lacks the foot speed to keep up with some of the faster ball-handlers in the NBA. Toppin isn’t a guy you’re going to feel comfortable switching onto any high-end guards in pick-and-roll defense. His body mechanics aren’t always great as he has some stiffness in his upper body, so he’s going to struggle to defend quicker forwards. Toppin still has some room to improve in rebounding, but with continued fundamental work that should continue to progress. Historically, Toppin would have been labeled a “tweener” as he lacks the foot speed to defend guards and the size to defend traditional big men. Still, with the way the NBA is trending, his shooting and playmaking should make him an immediate high-impact guy on that end of the floor. I do have my concerns about his upside, though, as he’s 22 years old and doesn’t possess elite athleticism like some other guys in this class. He is still relatively new to the game, though, and should continue to develop the finer points of his game in the NBA.

Shot selection – he is very capable of hitting the deep ball, but he doesn’t force it and is always looking to make the right play
An explosive above-the-rim athlete who excels with putback dunks and finishing around the rim
Reliable playmaker, makes good decisions and could be an excellent pick-and-roll passer
Tons of offensive versatility – can work in a variety of roles
A high-floor player who will surely be an impact player on offense in his rookie year
Activity around the rim could make him a strong offensive rebounder

Serious concerns over his lack of athleticism
A bit of a tweener – not strong enough to defend some big men, not fast enough to defend on the perimeter
Solid rebounder but has some work to do
Pick-and-roll defense is awful at times, awareness/feel for the game doesn’t extend to defense
Limited post-scoring moves, can’t create his own shots, raw dribble-drive player

Golden State Warriors. The Warriors are projected to have the first overall pick in this draft, and unless they opt to trade that selection, they will have a fascinating group of players to consider. Obi Toppin would fit in right away and make a significant contribution to the team’s championship aspirations. Toppin provides the type of long-range shooting and out-of-position playmaking that the Warriors’ front office guys will fawn over, and his defensive limitations would be masked playing next to Klay Thompson and Draymond Green. Toppin would fit in well as a high-floor role player and could continue to refine his game alongside an elite roster of players.

Detroit Pistons. The Pistons are in pressing need of some heavy-hitting star power as the team has hit a bit of a plateau in recent years, and Toppin doesn’t offer that type of ceiling. He could provide some instant offensive production, but his fit next to Blake Griffin in the frontcourt would undoubtedly be an awkward one as neither guy projects as an elite defender. Toppin also wouldn’t have the type of elite ball-handling and scoring next to him, which he likely needs to reach his potential.

Basketball IQ: 9. Toppin’s awareness and anticipation are some of the more attractive parts of his game offensively, but his lack of those same attributes on defense is puzzling. He doesn’t force his shots, and he would fit in well with most established offenses in the NBA, but he needs to work on translating his strong basketball IQ to the defensive end of the floor.

Shooting: 9. Toppin showcases an impressive long-range jumper, and I’m very confident he’s going to be a high-level shooter in the NBA. He’s also very smart with when to attempt the 3-pointer as he doesn’t force his own offense. His shooting is going to make him a valuable contributor to whatever team drafts him right away.

Passing: 7. His 2.2 assists per game don’t fly off the stat sheet, but Toppin does have an excellent feel for the game and can find his open teammates when opponents double-team him. He has some potential to provide playmaking as a low-post offensive hub and can move the ball along well on the perimeter.

Dribbling: 6. He can explode to the rim in transition and is a lethal fast-break finisher, but Toppin struggles to create his own shot off the dribble. I don’t expect ball-handling to be a real asset for him at any point in his career, at least in the half-court offense, and he’ll need to play alongside multiple ball-handlers to allow his strengths to shine.

Hustle: 7. Toppin is a hard worker on offense and plays with a ton of heart. His aggressiveness and authority at the rim pop on film, and he has continuously exceeded expectations throughout his career to this point. He does struggle to keep up defensively at times, but he’s a late-bloomer, and his work ethic should carry him.

Rebounding: 8. Toppin isn’t the strongest player in the class, and he lacks the pure explosiveness to be a constant issue with defensive rebounding. Still, his natural feel for the game should allow him to be an impressive offensive rebounder. He had several double-doubles while at Dayton and should continue to do so in the NBA.

Defense: 7. This is an area of some concern for Toppin as he lacks the foot speed to handle ball-handlers off the dribble. He also had several mental lapses on the defensive end last season and struggled to maintain his positioning when defending off-ball. He especially struggled with help defense. Toppin is never going to be an elite defender due to his lack of foot speed and strength, but if he cleans up the mental lapses, he has decent potential on defense.

Leadership: 9. Toppin is one of the more polished players in this regard as he led Dayton to a 29-2 record last season and has already proven himself several times despite low expectations. He should be a reliable locker room presence right away and will be a great leader as he becomes a veteran in the NBA.

Athleticism: 8. His athleticism is so inconsistent when it comes to various parts of his game. He’s an explosive above-the-rim athlete, and his redshirt sophomore year at Dayton contained highlight-reel dunk after highlight-reel dunk. Toppin’s speed in transition offense is particularly impressive. However, that same athleticism doesn’t always translate to his efforts on the defensive side of the floor.

Upside: 9. Most 22-year-old prospects are relatively close to their ceiling as professional players. Still, Toppin may be only scratching the surface as he is such a late bloomer to the game, having not played nearly as much ball as even guys a handful of years younger than him. He has the work ethic to continue honing his game and become one of the best all-around players in his class.

Obi Toppin has often received the comp of A’Mare Stoudemire due to his combination of explosive rim-rocking dunks and long-range shooting. Both players have a remarkable feel for the game as well. However, I see Toppin more as fitting the mold of an early-career Rudy Gay as an explosive presence at the rim who has great awareness and can contribute as an out-of-position passer. Gay has never been an elite defender, but he’s never been a real liability on that end of the floor either, which allows him to shine on offense. Toppin could follow suit as an all-around contributor who really shines with his above-the-rim power and long-range shooting.