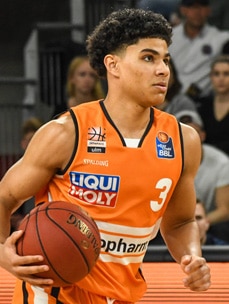 Killian Hayes is an American basketball player who grew up in France as his dad, DeRon Hayes who is a former Penn State star, played professionally in the French league. Hayes spent the last year playing for ratiopharm Ulm, a German basketball team. Hayes has steadily improved as he has played professionally in Europe against mature, developed talent and at just 19 years old his production in Europe has been impressive. Hayes can play either guard spot and might be better as a ball-dominant 2-guard in the NBA like James Harden.

Hayes is one of the highest-upside shooters in this year’s draft as he shot 39% from 3-point range in the EuroCup with ratiopharm Ulm and has steadily become more confident in his shot. His step-back three-point ability is extremely enticing as a transferrable skill to the modern NBA. He combines his high-level 3-point stroke with an impressive feel for the game at his age as he always seems to be one step ahead of the defense. He is adept at finding open teammates off the dribble-drive as he averaged 8.3 assists per 36 minutes this past season. Hayes is also a force around the bucket as he’s a very crafty finisher. He does tend to be overly reliant on his left (dominant) hand at times and development of his right-sided dribbling and passing will be crucial to his development.

There are a few areas Hayes needs to keep honing in on, including his off-ball defense as he tends to lose focus on closeouts and cutters. He does have elite on-ball upside, though, given his outstanding size for the guard position. Hayes will be able to guard point guards, shooting guards, and some small forwards in the NBA, and his positional versatility really boost his stock. At times, Hayes can force things offensively and he needs to tune up his decision-making but that will come as he gets more comfortable in the NBA. The weaknesses in Hayes’s game are very fixable as he transitions to the top level and his strengths make him one of the highest-upside prospects in this class.

Shooting – can drain 3-pointers off the catch, off the dribble, on stepbacks, etc.
Highlight-reel passer who consistently finds open teammates
Dynamic on the drive – flashy handles, crafty around the basket, smooth mechanics
Above-average size and strength for the point guard position
Confident leader and advanced basketball IQ for his age

Phoenix Suns. Hayes is likely going to be a top-five pick and the Suns most likely are not going to be in that draft range. However, if the lottery gods are kind to the Suns, they could put together a lethal backcourt combination for the future with Devin Booker and Killian Hayes. Hayes is an elite dribble-drive player who can drain 3s and his ability to play both on and off the ball makes him a perfect fit next to Booker. Hayes could come off the bench and learn from Ricky Rubio, a veteran point guard who can teach him a thing or two about passing and defense. The Suns need another elite scorer to make the playoff leap and Hayes is the guy who could help make that happen.

Cleveland Cavaliers. The Cavs already have Darius Garland and Collin Sexton in place, and while Hayes can certainly pick up some minutes at the small forward spot, I think he needs to play alongside better wing talent and elite shooting early in his career to maximize his development. The Cavs don’t possess those guys at the moment, and while Hayes could certainly develop into the best guard out of the three of him Sexton, and Garland, it seems like it would be a repetitive pick for them.

Basketball IQ: 8. Killian Hayes showcases some awesome floor vision on several one-handed passes downcourt and is adept at finding open teammates. He forces things at times on offense, though, and his court awareness could definitely improve in off-ball defense.

Shooting: 9. Hayes is arguably the best shooting prospect in this draft class as he shot 39% from 3-point range last year and has an array of off-the-dribble, Hardenesque moves. He’s shooting 84% from the free-throw line for his career and is a developing catch-and-shoot guy as well.

Passing: 9. Hayes is an elite passer who constantly finds open teammates and is always one step ahead of the defense. His confidence in the open-court allows him to produce tons of transition assists and he is an adept pick-and-roll ball-handler despite his weaker right hand.

Dribbling: 7. Hayes’s finesse game and advanced off-the-dribble shooting moves are very exciting, but he needs some work in terms of ball-handling. His right-hand needs to be developed more and he tends to pick up his dribble too often which leads to unnecessary turnovers.

Hustle: 7. Hayes isn’t the best athlete at his position in this class, but he plays hard and puts his nose down on his way to the hoop. He’s got some work to do in terms of off-ball hustle plays on defense but his ability to shoot the gap on passes is one of his best qualities.

Rebounding: 7. Hayes is only averaging 3.7 rebounds per 36 minutes across his career in Europe but he possesses the size, strength, and basketball IQ which should make him a solid rebounder in the NBA, despite perhaps limited athleticism.

Defense: 8. Hayes definitely has some work to do on defense, particularly off-ball as he tends to get lost in the shuffle at times. His awareness is a strength in some regards, though, as he is great at shooting the gap on passes and moving downhill to create transition offense. His strength and size should make him a high-level on-ball defender eventually.

Leadership: 8. Hayes is still young at 19 years old and he was playing on veteran European teams so he never got a real opportunity to be a leader on his team. He’s not a negative locker room presence by any stretch, but he would benefit from being more vocal on offense to create plays for his team.

Athleticism: 7. Hayes is limited in terms of explosiveness and bounce, which limits his potential as a scorer at times. He’s not the fastest open-floor player and he often loses his positioning on defense due to his limited athleticism. However, the skill facets of his game make up for this weakness.

Upside: 10. I would not be remotely shocked if in three years Killian Hayes is the clear best player in this class. His combination of off-the-dribble 3-point ability, impressive craftiness around the rim, and efficient shooting overall give him loads of offensive upside and at his size and strength, it’s not hard to imagine a scenario where he has very few weaknesses on either end of the court.

NBA Comparison: Killian Hayes reminds me of a young Manu Ginobli with his craftiness around the rim and advanced dribble-drive game despite a lack of top-end athleticism. His career could follow a similar path as an elite scorer off the bench or as a starter. At his best, Hayes could turn into a poor man’s James Harden as a guy who can create for himself and his teammates off the dribble. Like Harden, Hayes isn’t the best athlete at his position, but Harden has become one of the league’s best players built on incredible skill and finesse.