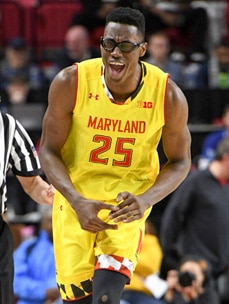 Jalen Smith is one of the most intriguing prospects in the draft. He has tremendous upside if he joins an organization that can finetune his offensive repertoire and has the patience to maturate his basketball IQ. Watching him compete for the Maryland Terrapins for two seasons, Smith sometimes looked like the best player on the floor. In other instances, he looked like a player lost in the mix. The Sophomore forward’s most compelling tools are his energy, shot-blocking, and athleticism- particularly as a lob threat. His high motor and energy will secure his minutes off the bench right away in the NBA, where he will make most of his impact on the defensive end. He possesses great athleticism and shot block skills that allow him to change shots around the basket. Offensively, Smith is a bit raw. He struggles as a passer and secondary playmaker and gets thrown around in the post due to his lack of weight/strength. He does provide an incredible upside as a PnP shooter, though. Smith has an uncanny touch from three for a player his size and shot 36.8% behind the arc in his second season at Maryland. Defense is his calling card, but he must do a better job at closing out on shooters and improve his footwork against ballhandlers. Smith’s inability to change direction and sloppy footwork on defense often leads to easy drives to the basket for opposing players.

Athleticism – great jumping ability, runs the floor well. Is an excellent lob threat. Decent in space as a defender
Rim Protection – easily one of, if not his best attribute. Good timing on block attempts without fouling
Rebounding – terrific offensive rebounder, always in position for put-backs, boxes out well\nOutside Shooting – good mechanics and balance on outside shots, flourishes in PnP situations, showed steady improvement in 3PT shooting from year 1 to year
2-Way Potential – combination of outside shooting, handle, touch inside and defensive versatility

Strength/Weight – gets pushed around due to lack of weight and strength, often ends up on the ground
Post Offense – no consistent or potent offensive repertoire in the post
Passing – bad vision in passing situations, especially while being trapped. Looks uncomfortable as a passer
Defensive Footwork – gamble and crosses feet against smaller players, has a tendency to hop on closeouts and gets beat to the basket

Utah Jazz. Playing alongside a true rim protector in Rudy Gobert should give Smith the freedom to roam around and challenge shots on the perimeter and the post. For years, the Jazz have struggled to keep up with the idea of positionless basketball and utilize more traditional frontcourt lineups (ex. Rudy Gobert, Derrick Favors, Tony Bradley, Ed Davis). Smith’s shooting provides the Jazz with a dynamic they’ve been lacking from their frontcourt for years. If Smith develops his offensive game and improves his IQ, I think he can become a quality starting option for Quinn Snyder and the Jazz. He also benefits from the number of two-way players that the Jazz already have on their roster.

Basketball IQ: 6. Defensive IQ is strong- not biting on shot fakes or fouling on block attempts- but offensive IQ is limited. Struggles in the half-court to make kick-out passes to open teammates, bad spacing at times. Is a decent cutter, must work on his post-game/passing

Shooting: 7. Good shot mechanics, looks comfortable shooting from the outside. Shot 36.8% from three as a sophomore, nice PnP potential

Passing: 4. Not a good passer, lacks vision in the halfcourt, and struggles to make the right reads. Turnover-prone, especially while being double-teamed or trapped in the post

Dribbling: 6. Has a decent handle for a big, struggles going left

Hustle: 7. Good energy and effort on both ends, battles for loose balls and rebounds

Rebounding: 8. Excellent offensive rebounder, athleticism helps him on put-back opportunities, boxes out well and in great position for rebounds

Defense: 7. Rim protection is his best attribute. Good timing and body control on shot block attempts, stays vertical and changes shot trajectory without fouling. Is good in space on defense, questions about footwork, and change of direction. Needs to work on closeouts/recovery

Athleticism: 8. Solid explosiveness off two feet, an excellent lob threat in the post/in transition. Good leaper, helps him as a rebounder and shot-blocker

Upside: 8. Has all the athletic tools to succeed but needs to improve offensive game, especially in the post and improve IQ. Needs to become a better passer and decision-maker with the ball

Jalen Smith’s game reminds me of a young Serge Ibaka, who in his prime was an excellent three-point shooter and rim protector for the Oklahoma City Thunder. Smith doesn’t have the same playmaking skills of Ibaka and isn’t nearly as strong as the former Thunder big, but has more potential than him on the defensive end. Like Ibaka, Smith will earn minutes right away given his shooting ability and high motor as an energy player off the bench. Athletically-wise, I like the comparisons between him and Wizards center Thomas Bryant. Bryant’s post-game and frame are more refined, but with experience, Smith could develop into a similar caliber player as Bryant has done.