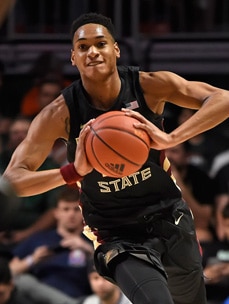 This draft is lacking in the traditional elite, blue-chip talent, but it makes up for its lack of potential All-Star quality in the way of several pro-ready star role players. Vassell might be the best of that bunch as he’s ready to make an impact on both ends of the floor right away. It all starts on the defensive end for Vassell. He’s the best team defender in this draft class as he is always one step ahead of the offense when it comes to reading when to close out or provide help defense. His elite length allows him to cover a lot of ground on the defensive side of the court, and he’s also an excellent shot-blocker. He’s also constantly creating turnovers as he reads his opponent’s passes and drives. All of these traits trace back to Vassell’s incredible floor awareness and IQ, which also translates on the offensive end where he does an awesome job of moving without the basketball and opening the floor for teammates. As a 41.5% 3-point shooter this past season, Vassell is an elite catch-and-shoot guy on offense. Vassell’s ability to read the floor also allows him to provide some secondary passing, although he certainly isn’t a primary playmaker in the NBA.

Vassell really impressed me with his improvement from his freshman to sophomore year at Florida State, particularly on the offensive end. In his freshman year, he only converted one off-the-dribble shot, but in his sophomore season, he converted 39 of those field goal attempts. His continued development off-the-dribble in the NBA would make him an even more deadly offensive threat, as his inability to handle the ball gets in the way of his adept spot-up jumper at times. Vassell also needs to bulk up a bit – he could probably stand to add about 15-20 pounds of muscle, but he needs to make sure he doesn’t lose his already pretty average athleticism. There’s good reason to believe that Vassell can continue to improve his game as he’s a very hard-working player and already made a significant leap in his couple of college seasons. Vassell’s 3-point shooting and all-around defensive impact give him a solid baseline in the NBA, and if he can continue to develop his off-the-dribble scoring he’s got some awesome upside as well.

Team defense – constantly making the right rotation, calling out coverages to teammates
Has an innate feel for the game and makes great decisions on both sides of the floor
3-point shooting, particularly off the catch, is going to be an asset right away
Great length and short-area quickness make him a high-level shot-blocker
Developing an off-the-dribble game and has intriguing potential there

Struggles when he’s asked to dribble the ball more than a couple of times in half-court offense
Not a top-level athlete, more smooth than explosive
Needs to add some muscle without losing quickness
Free throw shooting is concerning, should be at least around 80% with his skillset

Sacramento Kings. The Kings have put together a solid core of young talent with guys like DeAaron Fox, Buddy Hield, Bogdan Bogdanovic, and Marvin Bagley. What that group is missing, though, is a high-motor defender who can guard multiple positions and doesn’t need a ton of offensive touches to be impactful – that’s Vassell to a tee. He would be an elite role player for a blossoming young squad and with the help of DeAaron Fox’s playmaking, he might be able to develop more of an off-the-dribble game there as well.

Detroit Pistons. I hate to keep using the Pistons in this spot, but they really need a specific type of player at this point in their rebuild and Vassell isn’t it. He’s going to be a high-level role player wherever he lands with the potential for more, but the Pistons don’t have the right type of environment to foster his development right now. Vassell needs to be playing alongside a potent offensive guard, as well, in order to maximize his effectiveness.

Basketball IQ: 9. Vassell reads the game incredibly well on both ends of the floor and is constantly in the right position, whether it’s spotting up on the perimeter or cutting to the basket on offense or closing out to an open shooter or providing help defense at the rim on defense.

Shooting: 8. The 3-point shooting for Vassell has been very impressive so far as he finishes his Florida State career with a 41.7% clip. He’s not a dynamic off-the-dribble scorer and the free-throw shooting is a bit concerning, but if you’re looking for an elite spot-up shooter he’s your guy.

Passing: 7. Vassell’s role in the offense doesn’t dictate that he shoot the ball and he has an elite 2:1 turnover ratio, but it’s unclear how much of a playmaking impact he will make in the NBA. He could eventually provide some solid secondary passing for his team.

Dribbling: 6. Vassell’s limited game off the dribble will be an issue early on in his career as he’s limited to catch-and-shoot plays for the time being. He showed significant improvement in this area from year one to year two at FSU, though, and he has the potential for further improvement.

Hustle: 9. A high motor and determined work ethic can take you far in the NBA, and Vassell has both of those in spades. He’s constantly hustling to be a disruptor on the defensive end and works hard on offense to get into the right positions for catch-and-shoot opportunities.

Rebounding: 7. Vassell is a solid rebounder who works hard on the glass and isn’t afraid to get in the trenches with bigger players. However, he lacks the requisite strength at the moment to be a rebounding force. With his basketball IQ and length, though, there’s no reason he can’t be a solid rebounder in the NBA.

Defense: 9. Vassell might be the best defender in this entire draft class. He’s relentless on that end of the floor and is constantly looking to wreak havoc as a roaming help defender. His anticipation is spot-on and he rarely gets over-extended despite lacking elite foot speed. Vassell’s on-ball defense is very impactful and will only get better if he adds some more muscle.

Leadership: 8. On this past year’s Florida State team, Vassell was the leading scorer although he certainly received help from Trent Forrest and M.J. Walker, a senior and junior, respectively. However, Vassell was often the defensive leader as well, calling out coverages and matchups for a switch-heavy team. He’s a future defensive leader in the NBA.

Athleticism: 7. I wouldn’t go so far as to say Vassell is a bad athlete as his ability to shoot the gap and get out in transition is impressive for a player of his size, but he doesn’t quite have the explosiveness to get downhill with the ball on offense. He’s a technically refined player and top-end athleticism is less important given his skillset.

Upside: 8. Vassell has a solid baseline with his 3-point shooting and impressive defending, although he has significant upside as well if he can continue to develop his off-the-dribble scoring. At his peak, Vassell could probably become one of the better two-way wing role players in the NBA.

Vassell is going to contribute as a 3-and-D role player right away like Mikal Bridges has been able to do in Phoenix. Like Bridges, Vassell is a knockdown 3-point shooter who is a determined, high-motor defender as well. Vassell reminds me a lot of Robert Covington, as well, as he’s a similarly great shot-blocker and the two players have a similar offensive profile. If Vassell can continue to develop his off-the-dribble scoring, he has the upside to become a borderline All-Star in the Khris Middleton mold as a superb role player.