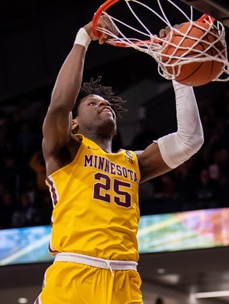 Daniel Oturu was just a four-star recruit coming out of high school but he has made a name for himself in two years at Minnesota. He made a massive jump in production in his sophomore season as he played 10 more minutes per game and boosted his scoring from 10.8 to 20.1 points per game. Oturu also led the Big Ten in rebounds (11.3) and blocks (2.5) per game this past season. After shooting essentially no 3-pointers in his rookie season, Oturu was surprisingly solid from long range in Year Two with a 36.5% clip on 1.7 attempts per game. His shooting form tends to be a little slow and he is very much a rhythm shooter, but there’s strong potential for him as a prospect if his long-range shooting continues to improve. Oturu was one of the more effective offensive players in the post this past year at Minnesota as he uses a variety of spin moves and counters in the painted area. He hasn’t run a lot of pick-and-roll to this point in his career and his screen-setting ability is a question mark due to a lack of strength, but he has potential in this regard particularly in the pick-and-pop game.

Oturu supplements his improving offensive game with an excellent rebounding ability – he may not be the strongest player or the best athlete on the court, but you can always count on him to display strong instincts to react to the ball and utilize his impressive length to grab the rebound. Oturu’s length (7’3″ wingspan) is a major plus in his player profile as it allows him to be a tremendous rim protector. He’s gotten much better at defending without fouling and his instincts as a rim protector are impressive, particularly in providing weakside help defense. However, his lack of top-end athleticism limits his ability to cover smaller players and he’s ineffective as a defender once he’s been beaten off the dribble. Oturu also struggles in the post at times on defense due to his limited strength – he needs to bulk up to be effective in guarding bigger NBA post scorers. Oturu’s lack of athleticism and strength are the biggest concerns at this point, but his massive sophomore improvement is notable and he has the potential to develop into a very good role-playing NBA center.

Variety of skilled moves and counters in the post loves the spin move
Made significant sophomore leap
Good dribble-drive game, picks up the ball at the perimeter and takes it inside using jab steps and pump fakes
Strong potential as an outside shooter, 36.5% on 1.7 3-point attempts per game
A confident shooter who doesn’t hesitate to pull up when he has space, great touch
Good utilization of ball fakes to get to the rim, will improve if NBA defenders respect his outside shot
Encouraging pick-and-pop shooter, effective when moving backward
Excellent rebounder on both sides of the floor, high motor and energy
Excellent rim protector, utilizes high-level instincts, athleticism, and length
Decent verticality but uses both hands to go up and has outstanding length
Cut down his foul total significantly in sophomore year, very good at contesting without fouling

Needs to be faster in shooting release, get more confident to depend less on long windup
Poor footwork in open space, gets exposed in pick and roll sets
He’s going to be hunted in the NBA on defense, will be exposed by fast guards/wings
Good at facing up against smaller players on defense but struggles if any kind of motion/pick-and-roll is used
Court awareness needs significant work, has tunnel vision on offense and loses players on defense
Struggles with post-up plays as his limited passing keeps him from finding space, can’t find open teammates out of double teams
Needs to improve core/lower body strength, high center of gravity
Too focused on post-up play, the NBA doesn’t feature this anymore
Lacks elite top-end speed/explosiveness that most of the good rim-running big men in the NBA have
Needs to bulk up and add muscle if he wants to compete with NBA big men on defense

Dallas Mavericks. The Mavericks are currently slated to have the first overall pick in the second round, the perfect range to select Oturu. The team has a significant need in the frontcourt, as well, as Dwight Powell will need some time to fully recover from his Achilles injury. The Mavericks get the second-most points in the NBA from 3-point range this season and don’t necessarily need an elite pick-and-roll man as Luka Doncic is already so good at getting downhill. The Mavericks’ offense would allow Oturu to consistently get open shots and improve on his form while his rebounding and rim protection would be important for a team that ranks middle-of-the-pack in both rebounds and blocks per game.

Philadelphia 76ers. The 76ers have problems as a team that won’t be fixed in one draft. However, the addition of an athletic scoring guard who can help pick up some of the offensive burden would help significantly. Oturu isn’t that. The Sixers already have Joel Embiid penciled in at center for the long-term and Al Horford is now coming off the bench. Oturu doesn’t have the athleticism or floor speed to play power forward next to Embiid and if anything he would slow down their offense that already plays with the 10th-slowest pace in the NBA.

Basketball IQ: 7. The floor awareness for Daniel Oturu comes and goes and more often than not he seems to be lost out there, at least on offense.. He has bad tunnel vision on offense and loses sight of the hoop while on defense he struggles in reading the play in pick-and-roll defense. The one bit of redemption here for him is his elite awareness when it comes to rebounding and protecting the rim.

Shooting: 7. For a center, Oturu’s shooting development is encouraging as he has legitimate long-term potential as a stretch five in the NBA. However, his shooting motion is far too slow sometimes and it may be difficult for him to get open looks if his release doesn’t speed up. His mid-range game is also a work in progress.

Passing: 5. Oturu was frequently double-teamed this past season at Minnesota and he never showed the ability to consistently pass out of the double-team to find open teammates. He plays with his head down in the post and turns the ball over too much for what should be his usage in the NBA.

Dribbling: 6. His straight-line dribble-drive game is actually pretty impressive and he utilizes impressive ball fakes and counter moves to get to the rim. However, Oturu’s limited athleticism and speed makes his future as a scorer a bit murky in the NBA.

Hustle: 8. What Oturu lacks in speed and athleticism, he makes up for in his strong hustle game. He plays with a constantly high motor and works hard to make winning plays for his team, particularly in terms of rebounding.

Rebounding: 9. Oturu was one of the best rebounders in the nation this past season and showcases impressive awareness to track down loose balls. His rebounding instincts, combined with his impressive length, will help his rebounding be a translatable skill immediately to the NBA.

Defense: 7. It’s really tough to pin down a number for Oturu here as his shot-blocking and weakside rotation defense are some of the best at his position in this class. However, he struggles to stay in front of faster ball-handlers at times and will need to improve his footwork and strength in order to avoid being blown by in the NBA.

Leadership: 8. Heading into Oturu’s sophomore season, the onus was on him to step up after four-year starting power forward Jordan Murphy used up his eligibility. Oturu bulked up significantly and became a more prominent scoring force for his team. He has a strong work ethic and is willing to take on a variety of roles for his team to help them win.

Athleticism: 7. Oturu lacks the top-end speed and athleticism in his profile that many of the NBA’s best pick-and-roll dive men showcase. He isn’t a slow player, but he has a tendency to make mistakes and be unable to recover due to his limited explosiveness.

Upside: 8. Oturu has some solid long-term potential if he can improve his footwork and technique and continue to develop his outside shot. While the NBA is obsessed with pace and space at the moment, Oturu’s rebounding and rim protection skills will make him useful for his NBA team. He can become a mid-tier starting center in the future if all goes well.

Defensively, Oturu’s profile reminds me quite a bit of Hassan Whiteside, the current Blazers’ center who has become under-appreciated in the modern NBA. Like Oturu, Whiteside relies more on his instincts, anticipation, and length in rebounding rather than any kind of elite speed or athleticism. Offensively, he reminds me more of Montrezl Harrell with his touch around the basket and ability to drive to the hoop. Oturu will likely fill a role early in his career to the one that Harrell and Kenneth Faried have hung their hat on – the high-energy big man who can rebound, defend, and score in transition. Oturu’s length is far better than Harrell’s and Faried’s, though, and his rebounding and rim protection are immediately translatable assets.