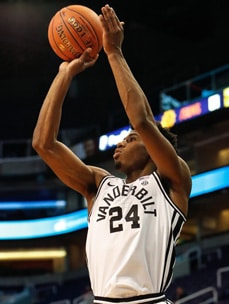 Aaron Nesmith’s sophomore season at Vanderbilt was magnificent as he averaged 23.0 points per game, the most by a Vanderbilt player since 1969. Nesmith’s season only lasted 14 games, small sample size to be sure, but he was the 5th-leading scorer in the NCAA at the point of his January foot injury that kept him out of the remainder of the season. Nesmith was shooting 52.2% from 3-point range on 8.2 attempts per game, a rate that would have made him the 6th-most efficient 3-point shooter in NCAA history had he played the entire season. His 3-point shooting is the first thing that’s going to stand out to teams who are scouting him as he may be the best marksman in this draft class. He’s adept at shooting off the catch or off a couple of dribbles and has a great pump-fake game. Nesmith is also excellent at moving off-ball and making himself visible to teammates for playmaking opportunities.

Nesmith is the ideal physical prototype for a modern-NBA wing as he has a 6’10” wingspan and a well-developed, muscular frame. Despite his physical prowess, Nesmith is somewhat of a raw defender as his footwork and on-ball reactions could use some work. However, with his high motor and combination of size and strength, he has a ton of defensive upside. He’s also an excellent off-ball defender which plays into his innate ability to read the floor. His offensive game outside of 3-point shooting could use some work as well – he struggles to score inside as his dribble-drive game is limited and his lack of playmaking is concerning as he averaged more turnovers than assists this past season at Vanderbilt. Nesmith is still just 20 years old and is a bit of a late bloomer to the game, so he has plenty of time to work on his current limitations. If everything comes together perfectly for him, he has the upside to become one of the premier 3-and-D wings in the NBA.

3-point shooting – incredible accuracy, able to shoot off the catch or off the dribble
Great movement off-ball, reads the game well and helps his teammates find easier passes to him
The frame is well-developed and easy to see him being a physical force in the NBA
An excellent off-ball defender who reads the game incredibly well and rotates/closes out
Doesn’t require a lot of shots/touches to be incredibly effective on offense
Easy to see defensive upside due to high motor and physical profile
Excellent basketball IQ

Struggles to score off the dribble, limited handles, will likely never be a go-to scorer
Raw on-ball defender – needs to work on footwork/reading the game
Little to no playmaking currently, struggles to find open teammates when he has the ball, just 58 assists in 46 games

New Orleans Pelicans. It appears that the Pelicans would like to play with Zion Williamson at power forward moving forward. Zion is shooting an impressive 42.9% from 3-point range this season, but he’s at his best when he’s able to bully weaker players (see: everyone) down on the block. Nesmith is the perfect type of off-ball marksman who the Pelicans need alongside Lonzo Ball in the backcourt. While Nesmith may be better suited to play at the 3 or 4 positions in the NBA, his positional versatility due to his impressive frame is going to be important. Nesmith would not be overly taxed on the Pelicans with plenty of playmakers on the roster and he would continue to develop the weaknesses in his game as he’s surrounded by other young talents.

Orlando Magic. There’s no doubt that the Magic are in need of 3-point shooting as they have the 5th-worst 3-point percentage in the NBA this season. However, the Magic also lack the playmaking that is needed to fully unlock Aaron Nesmith’s potential. The Magic have the 12th-fewest assists per game this year as the rotation of Markelle Fultz, Michael Carter-Williams, and D.J. Augustin at point guard just hasn’t cut the mustard. Orlando should be looking to add a dynamic guard who can pass and shoot before they add an off-ball threat to compliment him.

Basketball IQ: 8. Aaron Nesmith reads the game extremely well, provided he’s off the ball. On offense, he has some of the most impressive off-ball movement I can remember scouting as he consistently finds his way to open spacing for shots. On defense, he’s improved significantly in providing off-ball help and rotating for his teammates. He’s a smart player who should continue to improve.

Shooting: 10. If you’re looking for a shooter in this year’s draft, look no further than Nesmith. His long-range shooting was prolific at Vanderbilt this past season and there’s no reason to believe it was a fluke – his form is perfect and he’s equally proficient shooting off the catch or the dribble. Let’s just say he might end up with some extraordinary shooting badges in a future 2k game.

Passing: 5. Nesmith often has tunnel vision with the ball in his hands and needs to work on his fluidity and decision-making if he wants to become a solid secondary playmaker in the NBA. Nesmith has shown the commitment to his craft and impressive development to this point that shows he can improve on his passing in the future, but for the time being it’s a glaring weakness in his game.

Dribbling: 6. This is another significant weakness in Nesmith’s game. He’s great at shooting off one or two dribbles, but anything past that and he lacks dynamic ability. He also struggles in the dribble-drive game as he doesn’t consistently finish at the rim the way his frame suggests he should be able to.

Hustle: 9. Nesmith is a hard worker who takes no plays off and is constantly a part of the action. Every time I turned on a Vanderbilt game or highlights from their season I immediately noticed Nesmith flying around the court and impacting the opposing team. He doesn’t have top-end foot speed, but he doesn’t need it with his high motor and physicality.

Rebounding: 8. With his impressive frame and high work rate, Nesmith was an effective rebounder at 4.9 boards per game this past season at Vanderbilt. In his freshman campaign, he had 5.5 rebounds per game. Nesmith lacks athleticism to chase down loose balls against faster players, but with his size and strength, he’ll be an above-average rebounder in the NBA.

Defense: 8. Nesmith’s limited athleticism sometimes impacts him on the defensive end as he suffers from occasional blow-bys from opposing teams’ faster guards. However, his off-ball activity is impressive and was a noticeable improvement in his game from his freshman to sophomore year at Vanderbilt. With his frame, motor, and instincts, he should be a high-level defender in the NBA.

Leadership: 8. In Nesmith’s freshman season, he took on a larger role than expected after star guard Darius Garland’s injury (Garland is now with the Cleveland Cavaliers). In his second season with Vanderbilt, Nesmith became the featured player offensively as he led the team in shot attempts per game and was very efficient on his looks. There have been no reported concerns over Nesmith’s off-court attributes and he’s an incredibly hard worker.

Athleticism: 6. Nesmith just isn’t a dynamic athlete, which somewhat hurts his stock. He can do all of the little things on the court very well, but at the end of the day, he lacks the elite floor speed that would make him more than a high-level role player in the NBA. His limited athleticism really hurts his ability to get to the rim on offense and hurts him as an on-ball defender more often than teams would like.

Upside: 8. The upside for Nesmith in a 3-point trigger-happy modern NBA is substantial. He certainly has the ability to become the best shooter on his future NBA team and any roster looking for spacing would be thrilled to add him. At his young age and relative inexperience with basketball, he’ll certainly continue to improve, but his relative lack of athleticism probably limits him to more of role player-plus status.

The first player I thought of when I turned on Aaron Nesmith’s film is Buddy Hield. The current Kings’ shooting guard/small forward was one of my favorite prospects coming out due to his ridiculous shooting profile and above-average strength. Nesmith shares those qualities, as well as Hield’s less-attractive weaknesses including limited off-the-drive scoring/playmaking as well as on-ball defense. Nesmith also reminds me quite a bit of Robert Covington as a prospect, a gritty, strong player who was one of the best shooting prospects in his class. As Covington has, Nesmith has the potential to become a high-level defender in the NBA despite somewhat limited athleticism. If Nesmith’s defensive game develops as Covington’s did, Nesmith can become one of the best role players in the NBA.